Colibri: The Timeless Brand with A Fascinating History

For nearly a century the brand Colibri has been the first name in quality, sophistication and innovation when it comes to lighters and smoking accessories like cigar cutters, carrying cases, ashtrays and fine humidors. Colibri also extends its brand to high-end writing instruments, watches, jewelry and many other accessories for the discerning gentleman.

In 1928, when Julius Lowenthal started the company it was with a single product, the semi-automatic lighter. Over the decades Colibri has grown to become one of the most recognizable names among cigar aficionados and those of refined tastes. Read on to discover the colorful and inspiring history of the Colibri company, see it unfold over the last nearly-100 years, and find out why Colibri products are considered the pinnacle of sophistication and yet are highly affordable.

A Man with A Plan

In 1910, at the age of 18, Julius Lowenthal joined a German firm that created “smoker’s requisites”. Julius was assigned the task of working on lighters, a life-changing undertaking indeed. As Lowenthal honed his craft, he began to see there was a need for something more reliable (and less painful!) than the early version which relied on a flint-like substance and substantial thumb-power to create a spark and light the fuel-fed flame.

In 1928 Julius Lowenthal, along with his brother, Benno, launched J&B Lowenthal, which later became the Colibri company. The company manufactured, marketed and sold the Colibri Original, the world’s first semi-automatic lighter. 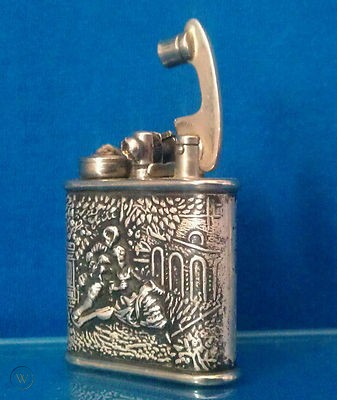 A new and highly-prized lighter, Lowenthal’s flagship product did away with some of the issues that plagued the “flint-wheel” lighter of the day, making it easier to create a flame that stayed lit. The Colibri Original, made in Switzerland, was considered a luxury lighter and preferred by men of high standards. There are still a few Colibri Originals in use today!

In the 1930s Julius Lowenthal obtained a patent for his innovative technology in designing the fully automatic Monopol lighter. This amazing gadget had an acceleration feature which pretty much ensured a light every time. Lowenthal packed up his penchant for engineering and design, along with his ever-evolving innovation and moved from Germany to England in 1933. He settled in London and established Colibri Lighters LTD. 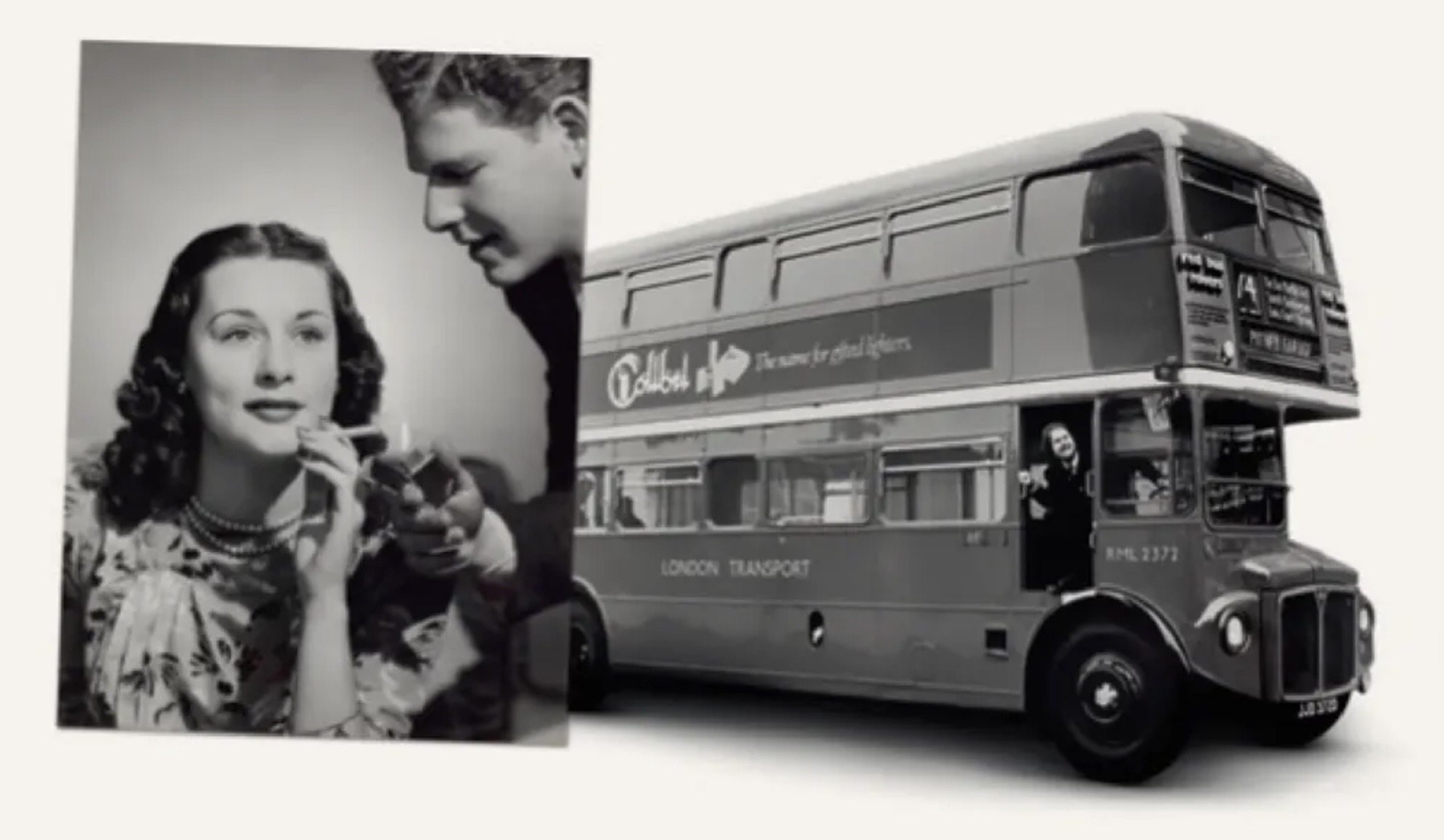 Wondering what became of brother Benno? He followed Julius to London and established his own lighter business, BenLow. The move proved to be a fortuitous decision for both brothers as they were out of Germany prior to the start of World War II. Unfortunately, sister Meta, recent to the family enterprise, stayed behind to manage the German division of the lighter business. However, she made it safely through the war and siblings Meta and Julius began working together in 1945.

However, the Colibri lighter business did not escape the war unscathed. During the German bombing raids on London, known as the Blitz, Colibri’s warehouses were destroyed. This misfortune didn’t taper the innovative and entrepreneurial spirit of Julius Lowenthal. Undeterred, Lowenthal went on to design Colibri’s Stormgard lighter, specifically made for and marketed to the allied troops.

A few years after the end of World War II’s siege in Europe Hans “Jack” Lowenthal, Julius’ son, came onboard and was thereafter named Managing Director, a title he maintained for more than 25 years. The company grew by leaps and bounds over this post-war period and, in the next four decades used their ingenious technology and design skills to bring forth a series of lighters, including sport lighters, multiple function lighters and many accessories for smokers and non-smokers alike.

Jack brought even more inventiveness to the Colibri name. Under Jack’s guidance the new generation of Colibri introduced to the world a visible multi-fuel refill for lighters, a flint delivery system which utilized a small hydraulic cylinder and the Monopol watch, designed exclusively for Colibri by precision watchmakers in Switzerland.

The very first prized Molectric lighter using piezoelectric technology (an electric charge is created by placing two like materials under mechanical stress) lighter was invented by the Lowenthals in 1961 and improved upon in 1967, then followed by the Sensation battery-powered lighter. This new breed of lighter employed state-of-the-art technology and only helped to promote the Colibri brand worldwide.

In 1974 the Colibri company was commissioned to design and construct the eponymous Golden Gun from the James Bond movie The Man with The Golden Gun. The gun was constructed from a Molectric 88 lighter, cigarette case, cufflink and a gold Colibri pen. Truly a remarkable piece of cinematic history. 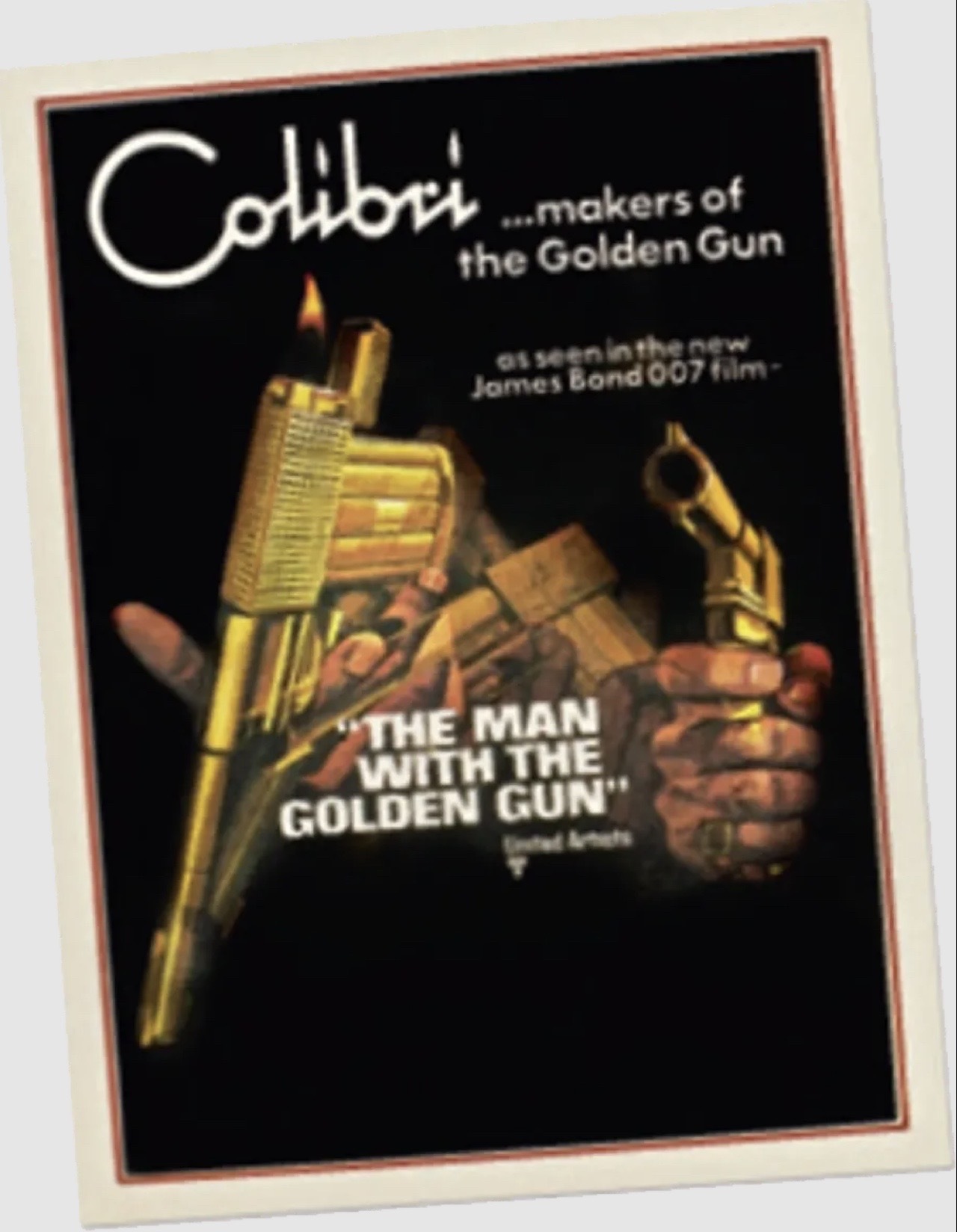 Jack’s son, David, came on board in 1980 and injected the old guard with even more ingenuity. The product line grew as the Colibri name grew in popularity. Smoking began to decline around this time so the ever forward-thinking Lowenthal family looked toward other accessories and accoutrement to the good life. Swiss watches, chic cufflinks, and a line of high-quality exclusive writing instruments became available under the Colibri brand.

Not surprisingly, the lighter’s popularity didn’t diminish quite as much as was predicted. The Colibri company continued production of new and remarkable lighters, including the three-way wind-resistant Power Flame Plus in 1982, and the fully windproof Quantum in 1987.

As the new millennium arrived some changes began to take place in the Colibri company. By 2009 Colibri was under new ownership and the operations moved to New York City. The company is still located there today and the new ownership did nothing to weaken the extreme quality or innovation associated with Colibri products. One only need look at the Trifecta or high-altitude Summit lighters to witness the ongoing inventive legacy of the Colibri company.

Not all remained unchanged. The logos have undergone quite an evolution themselves as the company moved forward. The original logo design featured two flames, over the letter I in the Colibri brand name. Next, the Lowenthals added a regal lion as representation of their name. Then a hummingbird was included as “colibri” refers to the hummingbird genus. Today’s Colibri logo is simply a hummingbird, paying homage to the symbolic meaning and message from the tiny, energetic bird; “Appreciate life and all its little pleasures.”

The Colibri brand is marketed and recognized all over the world. Their exclusive products are available on six continents and the company shows no sign of slowing their ever-growing popularity. Distinctive, superb quality men’s accessories and lighters are now complemented by premium butane fuel, compatible with all of Colibri’s lighters, stunning and stylish humidors, high-performance cutters and other items designed to make your cigar smoking even more enjoyable. Let’s take a look at some of the most popular products this exceptional company has to offer.

Recognized for its modern good looks and superior performance the Colibri Heritage Cigar Humidor is the undisputed star of this line. The cube textured design and Spanish cedar interior give your finest stogies the protection and preservation they deserve.

Reviews for this product are fantastic! Customers appreciate the high quality and innovative design and we think Julius Lowenthal would approve too.

Sophisticated with an edgy, modern design the Quasar line features a desk lighter,ashtray,punch, a showpiece if a desktop cutter and humidors. The inspiration for the Colibri Quasar design comes from the vintage hobnail pattern of the 1960s Colibri Molectric lighter.

The Quasar limited edition is a collectors dream and heirloom quality humidor. Its the product of a collaboration between two of the most highly-recognized brands in the world. Designed in New York by Colibri and handmade in California by renown humidor master craftsman Daniel Marshall.

Marshall is rated the number one humidor creator by industry and hobbyist bellwether, Cigar Aficionado magazine. The unique construction or the limited edition Colibri Quasar, with exterior made of Honduran Mahogany and the interior crafted from untreated Spanish cedar, work together to, as Daniel Marshall puts it, “enable fine cigars to become alive.”

The limited edition luxury Quasar humidors have a lifetime warranty through the manufacturer, Daniel Marshall and come in a few different color versions including metallic black and matte red. As you might expect, these stunning pieces are priced as collectors items in the $1500.00-$2,000.00 range.

Of course the not-so-limited Quasar humidors are designed in New York and priced more affordably for the average cigar smoker. These mid-market humidors bear the innovative design for which Colibri is recognized and announce to the world your fine taste and modern sophistication.

While relatively recent to the accessories game, Colibri is no less dedicated to innovation and quality when it comes to those products. Of course Colibri lighters made the name recognizable with state of the art design and technology. Along with cutters and convenient accessory cases, today's full line includes some of the finest lighters ever made.

Colibri Lighter, The Product That Started it All

All Colibri lighters are high quality and the latest technology. Here are a few of our customer’s favorites.

A precision cut is an important component of the art of cigar smoking. Here are the two top cutters preferred by our customers.

Colibri carrying cases come in both large and extra large to accommodate your preferred lighter and cutter. These cases are made from genuine leather in a beautiful and bold black. The sleek design means easy retrieval and the case protects the finish of your Colibri lighter and cutter.

Colibri is focused on delivering what the customer wants. Just like in the early days of Julius and Benno Lowenthal’s lighter business, the Colibri company is constantly innovating and evolving to anticipate and satisfy the needs of their customers. This kind of total attention to helping their clientele follow the lead of the hummingbird and appreciate life’s little pleasures has earned the Colibri brand a century of loyal patrons.

At Northwoods Humidors, we take pride in our attention to our customers. Anticipating your needs is what makes us top in the business. We are proud to offer hand-selected products that meet our high standards. Our hassle-free buying, competitive pricing and dedication to customer service means we make you, our customer, our priority.